From Wikipedia, the free encyclopedia
Jump to navigation Jump to search

of points is said to guard a polygon if, for every point

in the polygon, there is some

such that the line segment between

does not leave the polygon. 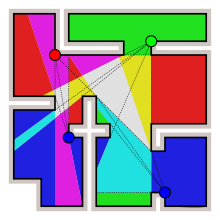 There are numerous variations of the original problem that are also referred to as the art gallery problem. In some versions guards are restricted to the perimeter, or even to the vertices of the polygon. Some versions require only the perimeter or a subset of the perimeter to be guarded.

Solving the version in which guards must be placed on vertices and only vertices need to be guarded is equivalent to solving the dominating set problem on the visibility graph of the polygon.

Chvátal's art gallery theorem, named after Václav Chvátal, gives an upper bound on the minimal number of guards. It states that

The question about how many vertices/watchmen/guards were needed was posed to Chvátal by Victor Klee in 1973.[1] Chvátal proved it shortly thereafter.[2] Chvátal's proof was later simplified by Steve Fisk,[3] via a 3-coloring argument.[4] 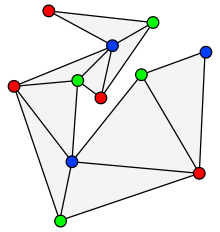 A 3-coloring of the vertices of a triangulated polygon. The blue vertices form a set of three guards, as few as is guaranteed by the art gallery theorem. However, this set is not optimal: the same polygon can be guarded by only two guards.

Steve Fisk's proof [5] is so short and elegant that it was chosen for inclusion in Proofs from THE BOOK. The proof goes as follows:

First, the polygon is triangulated (without adding extra vertices). It is known that the vertices of the resulting triangulation graph may be 3-colored.[6] Clearly, under a 3-coloring, every triangle must have all three colors. The vertices with any one color form a valid guard set, because every triangle of the polygon is guarded by its vertex with that color. Since the three colors partition the n vertices of the polygon, the color with the fewest vertices defines a valid guard set with at most

Chvátal's upper bound remains valid if the restriction to guards at corners is loosened to guards at any point not exterior to the polygon.

There are a number of other generalizations and specializations of the original art-gallery theorem.[7] For instance, for orthogonal polygons, those whose edges/walls meet at right angles, only

guards are needed. There are at least three distinct proofs of this result, none of them simple: by Kahn, Klawe, and Kleitman; by Lubiw; and by Sack and Toussaint.[8]

A related problem asks for the number of guards to cover the exterior of an arbitrary polygon (the "Fortress Problem"):

are sometimes necessary and always sufficient. In other words, the infinite exterior is more challenging to cover than the finite interior.[9]

In decision problem versions of the art gallery problem, one is given as input both a polygon and a number k, and must determine whether the polygon can be guarded with k or fewer guards. This problem is

-complete, as is the version where the guards are restricted to the edges of the polygon.[10] Furthermore, most of the other standard variations (such as restricting the guard locations to vertices) are NP-hard.[11] [12]

Regarding approximation algorithms for the minimum number of guards, Eidenbenz, Stamm & Widmayer (2001) proved the problem to be APX-hard, implying that it is unlikely that any approximation ratio better than some fixed constant can be achieved by a polynomial time approximation algorithm. However, an algorithm achieving a constant approximation ratio was not known until very recently. Ghosh (1987) showed that a logarithmic approximation may be achieved for the minimum number of vertex guards by discretizing the input polygon into convex subregions and then reducing the problem to a set cover problem.[13] As Valtr (1998) showed, the set system derived from an art gallery problem has bounded VC dimension,[14] allowing the application of set cover algorithms based on ε-nets whose approximation ratio is the logarithm of the optimal number of guards rather than of the number of polygon vertices.[15] For unrestricted guards, the infinite number of potential guard positions makes the problem even more difficult. However by restricting the guards to lie on a fine grid, a more complicated logarithmic approximation algorithm can be derived under some mild extra assumptions, as shown by Bonnet & Miltzow (2016).[16] However, efficient algorithms are known for finding a set of at most

An exact algorithm was proposed by Couto, de Rezende & de Souza (2011) for vertex guards. The authors conducted extensive computational experiments with several classes of polygons showing that optimal solutions can be found in relatively small computation times even for instances associated to thousands of vertices. The input data and the optimal solutions for these instances are available for download.[21] 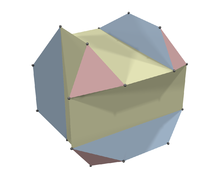 An example of a polyhedron with interior points not visible from any vertex.

If a museum is represented in three dimensions as a polyhedron, then putting a guard at each vertex will not ensure that all of the museum is under observation. Although all of the surface of the polyhedron would be surveyed, for some polyhedra there are points in the interior which might not be under surveillance.[22]